The investment casting process of medium temperature wax silica sol crusting is suitable for producing precision parts with small surface roughness and high scale accuracy, and has become a mainstream process and is widely used.

In the surface layer of zircon powder, join in the anti cracking agent accounting for 8% of the mass fraction of silica sol, and mix evenly. The powder liquid ratio of 3.3~3.4:1 can also be used to prepare the surface layer slurry according to the sequence of adding silica sol → mixing powder for 8h → mixing anti crack agent for 5h → mixing wetting agent for 2h and defoamer for 1h.

The monotonous surface layer after blowing strong wind not only greatly shortens the monotonous time, but also has no cracks, falls, bulges or delaminations. The wet strength of the surface layer is significant, and the inner cavity of the module is monotonous with the outer shape. The casting quality is shown in Figure 1 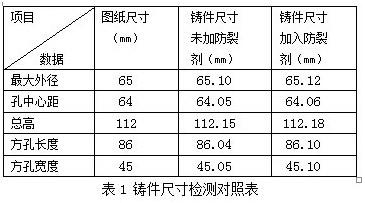 The anti crack agent put into the surface layer slurry is a kind of polymer with long bond molecular shape. The surface of silica sol is modified and maintained, which reduces the Zeta electrode potential of silica sol gel and weakens the mutual repulsion between colloidal particles. In the process of dehydration and gelling, due to the entanglement of polymer molecular chains, the silica sol micelles are closer to each other, and then the gelling speed is accelerated. Production has proved that under the action of polymer, silica sol can start the gelling process sensitively with less water evaporation, and finish the rapid monotony of the surface layer.

At the same time, because the polymer is alkaline and water-soluble, it is also a binder, which can play a role in physical reinforcement of the surface layer in the silica sol gelling process. Because of the excellent film-forming property of the organic polymer, the binder can form a uniform and continuous adhesive film between the refractory materials of the shell, and the bonding effect of the adhesive is complete, so that the shell can finally establish the same room temperature strength as the back layer.

Moreover, the good flexibility of polymer molecular bonds can improve the coating of the binder in the powder and sand, effectively prevent and reduce the tendency of surface layer cracking, bulging and delamination, and play a role in maintaining the surface layer. It can be proved convincingly from the electronic microscope photos of organic polymer shell cross section comparison. Now, the process of increasing crack inhibitor is being used by investment casting manufacturers.

After the surface layer shell is fully monotonous, the module is immersed in the silica sol, and then the second layer shell is coated, which is the traditional silica sol pre wetting treatment process.

However, it is appropriate, necessary and feasible to apply pre wetting treatment to the back layer.

Some precision casting manufacturers dip the silicon sol before the surface slurry is applied to the module. The reason is that it is easy to operate. The author holds a negative attitude towards this.

Whether wax based or resin based, their common feature is hydrophobicity. The hydrophobicity of resin based is particularly excellent. The coating performance of the mold is considered by the angle between the investment mold and the binder. The surface tension of sodium silicate binder is 60 (10-3N/cm), and that of sodium silicate+non-ionic wetting agent is 37 (10-3N/cm). The surface tension of silica sol binder is 71.6 (10-3N/cm), and the surface tension of silica solution glue+non-ionic wetting agent is 36 (10-3N/cm). It is emphasized that both water glass and silica sol are water-soluble adhesives, which contain appropriate mass fraction of water, and the hydrophobicity of the investment mold is prominent. Remarkably, the wetting agent plays an important role in reducing the surface tension of the binder. The wetting mechanism is: after the surface layer silica gel slurry is involved in the non-ionic active agent, one end of the lipophilic group is attracted by the mold and placed in a direction, and the hydrophilic group is attracted by the water molecules and left at the slurry interface, forming a monolayer composed of surfactant molecules, and then reducing the interfacial tension between the slurry and the mold, so that the slurry and the mold are combined, Good coating performance is achieved.

According to the above analysis, the wetting effect of the silica sol on the module does not improve the wetting effect between the silica sol slurry and the investment mold. On the contrary, the viscosity of the slurry will decrease. After the silica sol on the investment mold contacts the surface slurry, it is still necessary to rely on the wetting agent in the surface slurry and the investment mold to play an affinity role. I feel that the operation is good, but that part of the slurry becomes thinner instantaneously, and the fluidity is better. The improvement of the coating property is not silica sol, Instead, it depends on the smoothing wet agent. The production practice has proved that 0.04-0.042% of wetting agent is appropriate for 3.3 ～ 3.4:1 powder to liquid ratio of surface layer slurry. The accounting method is: wetting agent%=mass fraction of wetting agent/(mass fraction of silica sol+mass fraction of powder) * ).

In addition to focusing on SiO2 mass fraction, PH value and kinematic viscosity, the physical and chemical objectives of silica sol also focus on the diameter of colloidal particles, which is often referred to as the particle size of silica sol.

The average particle size of silica gel produced in China is 8~20nm, but also 8~15nm, 12nm and 22nm in the United States, 8nm and 14nm in Japan 830. Taking the application of Japanese silica sol in domestic precision casting factories as an example, 1430 is used for the top layer and 830 is used for the back layer. According to the material introduction, most precision casting factories in Japan also prepare and use slurry according to this particle size.

There are errors in the theory and practice of production control on silica sol colloidal particles with large diameter and low shell strength. The application at home and abroad is just the opposite.

2.3 The application of large colloidal silica sol in surface slurry will not affect the surface quality of castings. Dip the module with silica sol before making the shell, which is not beneficial to the quality of the surface layer shell.